Union Minister for Communications and IT Shri A. Raja launched the ‘My Child First’ initiative under the Rural Postal Life Insurance (RPIL) Scheme of our Department at Avinashi Post Office 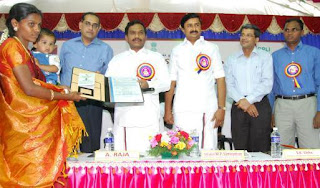 Union Minister for Communications and Information Technology A. Raja on Sunday launched the ‘My Child First’ initiative under the Rural Postal Life Insurance (RPIL) Scheme of India Post at Avinashi Post Office on 1.3.2010.
The concept is aimed at promoting the habit of investing in insurance scheme among families in rural areas for securing means to provide higher education to their children. Explaining the salient features, Mr. Raja said that the insurance cover ranging from Rs. 50,000 to Rs. 3 lakh would provide the insured with adequate funds to take care of the education of their children on its maturity after 15 years. The premium paid by the insured would go into a corpus and the entire earnings would be returned to them with bonus.
“The amount insured will thus get doubled in 15 years,” he added.
The Minister announced that Avinashi sub-post office would be given a thorough makeover both in terms of physical outlook as well as upgrading delivery of services through IT-enabled procedures under the ‘Project Arrow’ scheme of the Department of Posts before March end.
Courtesy : The Hindu
at 7:48 PM


CLASSIFICIATION OF CITIES FOR HRA


Remaining cities/towns which are not covered under "X" or "Y" are classified as "Z" for the purpose of HRA.

All efforts have been made to ensure accuracy of the content on this blog, the same should not be construed as a statement of law or used for any legal purposes. Postal Staff corner accepts no responsibility in relation to the accuracy, completeness, usefulness or otherwise, of the contents. Users are advised to verify/check any information with the relevant department(s) and/or other source(s), and to obtain any appropriate professional advice before acting on the information provided in the blog. Links to other websites that have been included on this blog are provided for public convenience only. Postal Staff Corner is not responsible for the contents or reliability of linked websites and does not necessarily endorse the view expressed within them. We cannot guarantee the availability of such linked pages at all times.